Industry Tips: How to Use Your Broadcasting Voice

In both the radio and television industries there may come a time when you have to step in front of a microphone, especially if you’re aiming to be On-Air talent. Once you in front of a camera or microphone you'll need to be confident.

Some of you might think you need to have a certain tone or feel to your voice while broadcasting when the truth is, you don't. Your broadcasting voice is the exact same voice you use when you are talking to someone standing right next to you. You don’t need to become the announcer from the Justice League, you just need to sound like you are having a conversation. 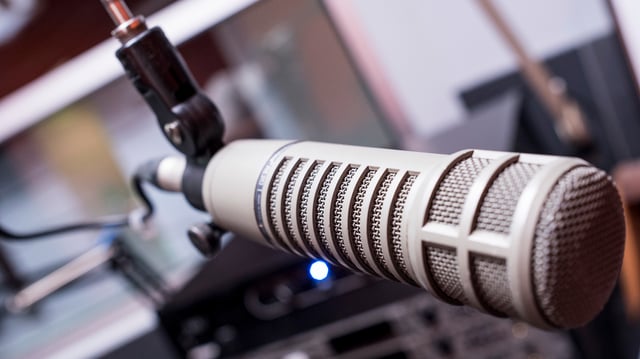 Today we are going to talk about 5 tips to keep in mind when using your broadcasting voice.

Be One-on-One: In these industries, radio especially, never address your audience as a whole. Instead, speak as if you are talking to each listener individually. There might be hundreds, or even thousands of people tuning into your show but if you can sound like you're talking to only one person, you create a strong connection with the whole audience. As stated in an Audio Journal article on Broadcast Tips "Even television hardly achieves this intimacy that radio does".

Be the listener’s friend: Even if you talk to only one person, talk to them not at them. Some people get too caught up with the fact that they are on the radio and become overly formal or use words they wouldn’t normally use, and it comes off as fake. As mentioned in Richard Dally's 7 Tips for online DJ's, some DJ’s will have a picture of a friend or family member in front of them and pretend to talk to that person to help avoid this problem.

Look over your scripts: We all have our own way of speaking and if you have a pre-prepped script, you may have to make some changes to make it to flow more naturally. Whether they are written by you or not, practice your scripts so that when you open that mic you know what you are going to say and how you are going to say it. Most of the time practicing the script will go well but sometimes your scripts needs tweaking. A great analogy for this from The Balance's How to Develop Your Voice for TV or Radio, “roads and bridges” sounds a lot better than “transportation infrastructure”. This meaning that not all words will sounds fluent coming out of your mouth, if you have to make a few changes to make them sound more natural then do it.

Learn to ad-lib: While this is more relevant to TV it can be helpful in radio too. When you’re standing in front of a camera, live on the scene, viewers don’t want to see you reading from a script. They want you to tell them what is going on. For those who rely on a script too much they will try to script the story out in their heads. Instead, you should have a list of bullet points and tell the story in your own words.

Critique yourself: Most people hate listening to recordings of themselves but it is a great tool to help identify your weaknesses. Try not to concentrate too much on how you sound. Instead, focus on listening to your “crutches”. The “you know” “like” “uh” and “um”s. It's easy for these cruches to happen, it's a natural thing we do while thinking of the next word to say in our sentence. The best way to stop doing it is to first identify that it is happening. Once you have Identified these cruches and are contious of them while they happen, just replace them with silence. Getting rid of these, while following the rest of these tips is a great way to help you build your broadcasting voice.