Wes Knodel was not a stranger to the media industry by the time he attended Specs Howard School of Media Arts. Before enrolling, Wes had already been involved in a number of independent short films. He had also worked a few jobs on the more major productions drawn to Michigan by the incentives the state government was then offering. When those incentives were revoked by the state and media production jobs became harder to find, Wes decided it was time to further his formal training in the industry and made the decision to enroll in Specs Howard. Specifically he sought further education on the television side of video production. 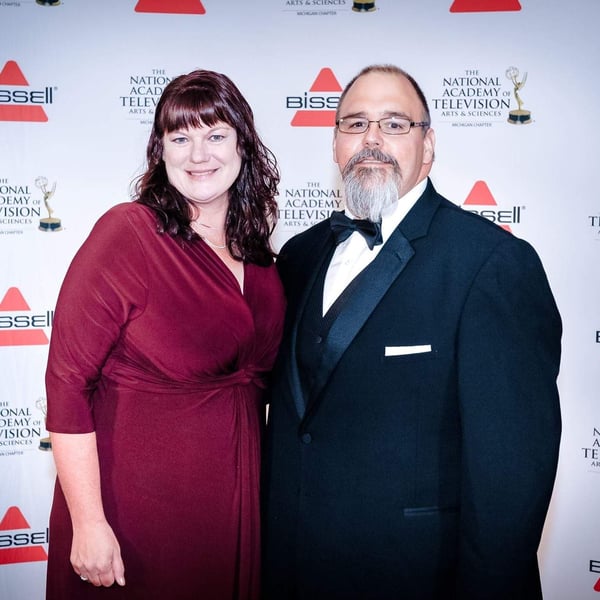 Wes graduated from the Specs Howard School of Media Arts in 2010. Immediately following his graduation, Wes was interested in pursuing a career as full-time photographer. He followed up on a job lead he was informed of through the Career Services department at Specs Howard and soon found himself interviewing with WEYI out in Clio, MI. He applied and went through a round of 3 interviews. With a little help and encouragement from another Specs Howard graduate that was already working at WEYI he landed the position. The job was full time, though split between two roles: one as a photographer, and one as a director.

Wes noted this role as being responsible for changing his career path. While he was initially drawn to the position for the opportunity to work as photographer, the more time he spent on set directing, the more the director role seemed to click with him. Sometime not long after joining the staff at WEYI, the full time position of morning show director opened up. Given his success with directing thus far, the position was offered to Wes. Deciding to lean into his new found enjoyment of directorial work, he gladly accepted.

Wes continued to work as the director of the morning show at WEYI for 2 years, at which point he made a move over to WDIV as a part time fill in, though he was quickly moved to full time director of both the 6 pm and 11 pm news shows for Channel 4 WDIV, where he works to this day. As a director, Wes is responsible for making sure the show runs as cleanly and efficiently as possible. Before the broadcasts occur, he is responsible for pre-programming the camera shots into their software system. Once the show is on the air, Wes is down in the control room, punching the show and making sure the right camera is being broadcast at the right time, as well as being responsible for the graphics that are running and other technical touches. He takes pride in running a clean show, and finds the most rewarding part of his job is getting crucial and timely information broadcast to his audience in an effective, impactful manner. A large part of his pride in the show is based on the strength of the team Wes works with in delivering the news. When running a live broadcast the size of those put out by WDIV it’s important that everything goes smoothly, and that people are able to react quickly and efficiently when they don’t. Things are not always straight forward and simple in the world of large scale news broadcasting, but Wes and his team work together well to make sure everything goes the best it can.

Wes’ contributions to news media in the state of Michigan have even been acknowledged on a regional scale. He has been nominated 3 times for a local Michigan Emmy award and won the Michigan Emmy for Directing in 2016. Wes considers this the most memorable moment of his career, and a great honor for himself. He hopes to continue to deliver meaningful and impactful news broadcasts and pieces in the future.