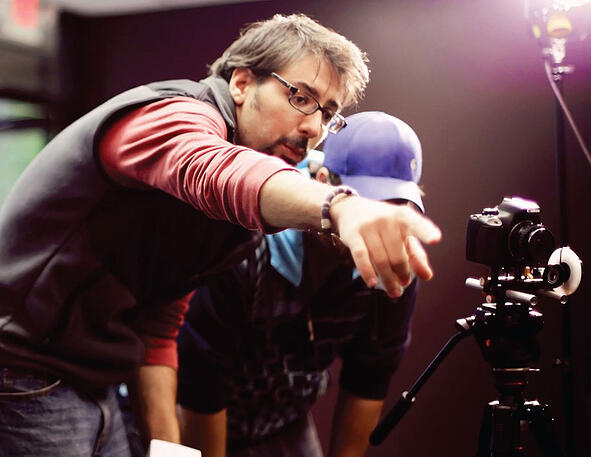 From writing to shooting to editing, it can take months, if not years, to make a movie.  So wouldn’t it be crazy, not to mention exhausting and stressful, to try to do it in just 48 hours?  You bet it would.  But it’d also be a lot of fun, and that’s exactly what drew several Digital Media Arts students from Specs Howard to compete in the Detroit 48 Hour Film Project.

The 48 Hour Film Project is a filmmaking competition where teams have two days to make a film based off a randomly selected genre, such as drama, horror, sci-fi, comedy, or even musical, They also have to include certain elements, such as a character and a prop, in the film.  It’s an exercise in preparedness, teamwork, and sleep-deprivation.

“Just get a lot of sleep beforehand and be prepared to stay up late,” said Nick Dear. a recent DMA grad.  Dear has competed in the 48 twice and knows from experience that, although a lot of fun, completing a film in such a short period of time doesn’t happen easily.  His team experienced computer problems while editing.  His advice?  “Plan ahead of time and be prepared for something to go wrong.”

Indeed, it seems like something will go wrong.  For Ryan Burris, a current DMA student, it was finding an actress.  “We ran through three people,” said Burris.  “One got sick, one was too young for the role, and one partied too hard the night before.”  In the end, his teammate’s mom saved the day by playing the part.

It’s these complications that make the 48 such a valuable exercise in creative problem solving.

Of course having a Specs education helps, too.

For some students it was the knowledge of shot composition they learned in school.  For others it was the experience in lighting a scene and recording audio.  For grad Jeff Meadows it was the data management and editing skills he learned.  “Editing would’ve been much more difficult and would’ve taken three times as long,” he said.

But something else, something special that all Specs students learn came in handy, too - the value of commitment.  “The school has helped me realize that in order to do a good job you just have to commit yourself to doing the best project you can. said current student Andrew Wilson.  “You have to put everything you have into it, and if you don’t, you’re going to regret it.”

For all it’s challenges, the 48 offers plenty of rewards.  In the week after the competition, the films are shown at an actual theater, so filmmakers get to see their creations on the big screen.  There’s also an exclusive awards ceremony for filmmakers where the top prize is thousands of dollars worth of production gear.  For Nick Dear, the biggest reward was the opportunity to meet other filmmakers.  “Just meeting all the new people, networking, the people were awesome and now we’re all Facebook friends.” he said.  “We will definitely work together in the future.”

Still for other Specs students, the greatest reward was that the competition provided the chance to fulfill a dream.  “I’ve been wanting to do this since I was 10 years old,” said current student Enzo Vitale of making a movie, “and then realizing that it’s happening is just something that’s really big.”

Vitale’s group actually missed the completion deadline, meaning their film would be ineligible for any awards, however, even this devastating experience taught him an important lesson about the film industry.  “We didn’t make it in the forty-eight hours, we turned it in late, so in that aspect we failed.  But that taught me that failure is probably a big part of this.”

As intense as making a film in forty-eight hours can be, many competitors return year after year, improving upon what they learned in previous competitions to make stronger entries.  It’s a great way for Specs students to network in an industry where it’s important to know the right people.  And it’s an excellent exercise in filmmaking for students who want to test their skills in the real world.

What words would Specs Students use to sum up the 48 Hour Film Project experience?  “Chaos.”  “Fun.”  “Invigorating.”  “Enlightening.”

It it sounds like fun to you, you can learn more about the 48 Hour Film Project at www.48hourfilm.com.