What is Broadcast Media Arts?

What is Broadcast Media Arts?

Creating audio and video content and distributing it to the masses via radio, television or the web is broadcasting. Broadcast media arts is everything that goes into those productions. Being the voice or face of a show, running an audio board, directing live television, creating audio/visual effects and graphics, writing scripts, operating a camera and marketing via web and social media are all examples of what brings a broadcasted show together.

What do I need to know to obtain a career in Broadcasting? 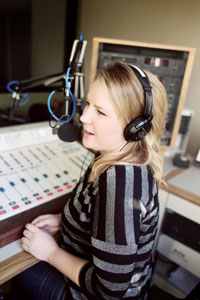 To obtain a job in the broadcast industry you must be able to:

What types of jobs are available in Broadcast? Are all broadcast media arts jobs on-air?

Not all jobs in the broadcast industry are on-air positions. Yes! Many of them are, but it's the people behind the scenes that make these programs go live. Some examples of broadcast media careers are:

Where Can I Learn About Broadcast Media Arts?

At Specs Howard School of Media Arts! At our Southfield campus, students will learn the necessary skills to get their start in the broadcast industry. Students will learn to write for broadcast; techniques to be live on-air; and how to create video and audio recordings. Students will also learn marketing via social media. Classes are held two days a week combined with online learning from instructors with experience in the broadcast field. Their experience and know-how will help you get started in the Broadcast field. To learn more and schedule your tour, contact an Admissions Representative by calling 866-61-SPECS, clicking here or click the button below.