50 Years of the Specs Howard School: Reminiscing with Randy Z

Randy Z is a local legend in the halls of the Specs Howard School of Media Arts. His career with the school has spanned 32 years and almost every job title a person can hold. He’s been an instructor, an admissions advisor, the master of ceremonies for our graduations, and even the grill-master at our company parties. This week, Randy ends his time with us and heads into what is sure to be an adventurous retirement, but before he goes we got him to sit down and tell his story, including all the reasons he was proud to spend 32 years working at Specs Howard.

Hey groovy guys and gals! Randy Z here. You may remember me spinning hot wax hits for your listening pleasure on country, rock, jazz and oldies radio, then segueing into working with students for 32 years at this now-legendary talent factory we call the Specs Howard School. (If you’re not a graduate of the school, I’ll pause while you look up “segueing “. . . and no, I didn’t ever really talk like Les Nessman). I’ve been around for a while, and I’ve seen some changes. 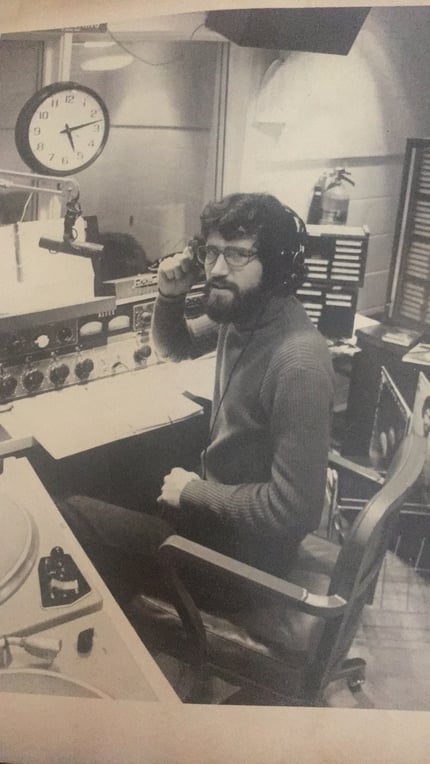 When I did radio in the seventies and eighties, everyone knew Specs Howard. Just as now, the radio and television commercials made it a household name. It was so omnipresent that we in the industry would refer to a beginner in any field as a “Specs Howard graduate.” The legendary WXYZ/CKLW morning host Dick Purtan often referred to it as “The Specs Howard School of Broadchasing.” (How times have changed!) But joke as we may, we did hire a huge number of the school’s graduates (at one point in the late nineties we counted over 600 Specs graduates working in lower Michigan alone).

My first personal contact with the school was through now vice-president of industry relations Dick Kernen, when I was programming an FM rock station in Ann Arbor. In those days, radio and television station telephones had one thing in common – a little silver sticker on the front. It read: “Need help? Call Kernen - 569-0101!” Dick Kernen was the industry face of the Specs Howard School of Broadcast Arts. He made it his business to visit every station in Michigan at least once a year, and he became the number one resource for obtaining new talent or experienced talent – DJ’s, producers, editors, news or anchor people, engineers or interns. 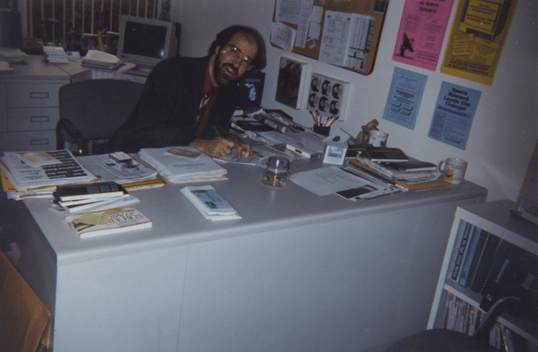 You see, in a business that thrives on rivalry, stations aren’t usually in the mood to share a lot of info with each other. But Dick would travel and talk to absolutely everyone, and that made him a source of knowledge on who was who, who was where, and what was what in Michigan broadcasting, especially radio. When he wasn’t out in the field, he was (and still is) on the phone all day. If you needed an intern, or a beginning DJ or board op, Dick was the guy to call. If you needed someone with five years of production experience, Dick knew someone who had the experience and was itching to leave for greener pastures. If you needed to know what other stations were up to, the common saying was “Dick knows!” (There’s a joke in there somewhere . . .).

As my relationship with the school grew, it became my policy to bring new station employees in as interns before offering them a job. (Note to current students: take that internship!). I would call Kernen and request a few newbies to screen for serial-killer and pyromaniac tendencies before hiring them.

When I would visit the school, I was impressed by how much real hands-on work the students did, and how much real-world information they were receiving. The faculty were real radio and television pros. This was very different from the academic “communications” programs at the big universities in the Ann Arbor area. (No offense meant – I’m still proud to say that I graduated from one of them.) 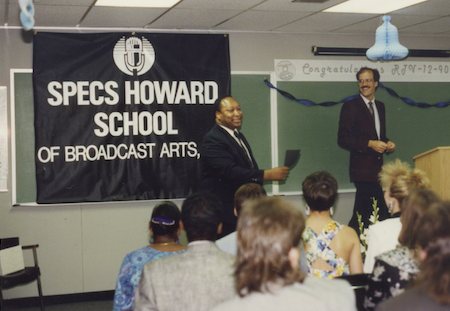 When I left Ann Arbor and moved to Southfield in 1987, I was wondering what to do next with myself. I accepted an offer to teach at the school. The first thing I was asked to do was to take over the night sessions of Mr. Kernen’s “Career Perspectives” course. It was scary at first. There’s nothing like having thirty knowledge-hungry would-be broadcasters staring at you with anxious eyes for two whole hours, expecting all the secrets. You quickly realize how much you know and also how much you really DON’T know about the business. I was used to talking in 20- or 30-second bursts on the radio. This was going to be very different.

I started doing my homework and discovered that teaching, though different from radio and TV, could be a great form of performance art. How do you keep that many people focused and interested for two hours at a time? I know I’m not the first to realize that comedy is the easy answer, and I worked to keep it entertaining. In those days, the male faculty were required by Mr. Howard to wear suits to work. That made it easy for me to go into a Steve Martin routine, using lots of clever (if I do say so myself) wordplay and rigging my suits with props (most notable my Barbie doll – when someone in class would say “here’s a little bit of Blondie” I would pull her out and say “No, it’s a little BITE of Blondie” and bite her head off. “And of course, that’s a little bit of Ozzy Osbourne!” I crack me up. 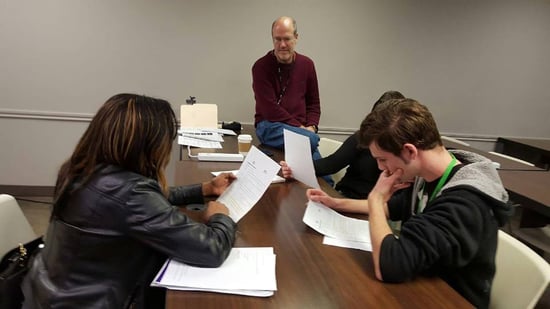 So 30 years later, after working in education, admissions, student services, what do I know about the Specs Howard School? Like the media business, it keeps changing. That’s the secret.

The technical skills keep changing. When I got here, we were teaching vinyl records and turntables. TV cameras with built-in VHS and ¾-inch rack machines were the latest tech. Video editing was cuts-only and insert editing. If you want a dissolve, send it to the A-B roll lab and get it back tomorrow! (Today students are upset when an effect needs 10 seconds to render!)

In radio production, it was vinyl records and turntables. Then came CDs, mini-disks and smaller tape formats. Physically cutting tape gave way to digital non-linear editing systems for audio and video. (And by cracky, youngsters, count your blessings!) Content distribution? We used to have to make duplicates of projects on tape in real time, then package them up, TAKE THEM TO THE POST OFFICE, and pay postage. Now we can send our finished work with the click of a mouse and get back to social media, er, work. 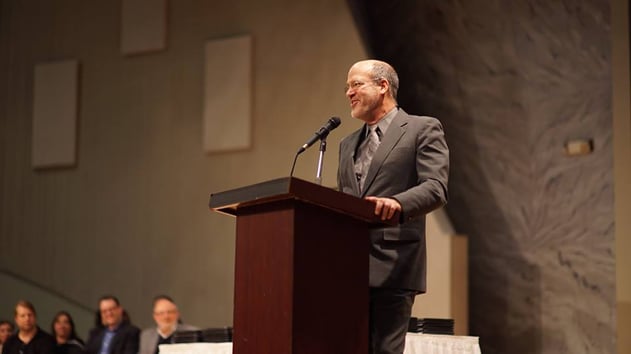 The tech keeps changing, and the Specs Howard School has always kept changing with it. Video editing is another good example. As tape left the scene, the school became the first AVID edit training center in Michigan. When the cheaper and faster Final Cut Pro system started dominating the business, the school responded quickly. Now Adobe Premier is the one to learn for video editing.

In the 2000s, two new programs were added to the Specs Howard lineup (Graphic Design and Digital Media Arts), and the school’s name changed from “Broadcast Arts” to “Media Arts.” What was once mainly a DJ/newsperson school began giving students the opportunity to focus on video production without taking the “talent” route. As graphic design work moved away from big agencies and into local companies, the Specs Howard Graphic Design program was launched to satisfy employer demand.

The technology always keeps changing. But no matter how production and delivery of media change, something will stay the same – the need for great “content,” and the telling of great stories. Whether a feature, a documentary, a commercial or an interview, the real purpose is to engage listeners or viewers with interesting images, sounds and ideas. The content comes through the technology. Students need to learn to play the instruments (the cameras, the microphones, the software), but what comes out has to engage and move the audience. They have to understand the audience and change or enrich their lives. The faculty at Specs know this, and it permeates everything they give to the students. 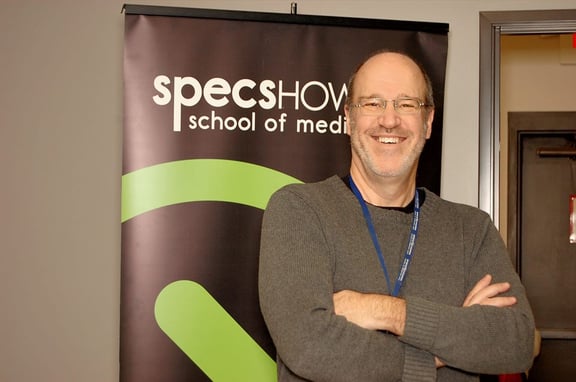 The nature of the jobs keeps changing as well. Live TV news is an example – a TV news show 20 years ago needed 9 or 10 people in the studio and control room. Now there may be one person in addition to the talent (or none!). At the same time, video production has moved into many other areas and created more demand for qualified graduates. The industry changes, and the school’s programs change with it.

Twice a year the school holds program advisory meetings where employers are invited to advise the school’s management and faculty on what is changing, what is new, and what is no longer relevant. For example, the Specs Howard broadcasting program was once separated into “Radio” and “Television” concentrations. But it became clear a while back that even radio personalities need video skills to feed their stations’ need for video content on their websites and other places. So the program is now “Broadcast Media Arts.”

At Specs, the students learn that their dream is not just a dream – that these are real careers, and anything is possible if you pick up the skills and practice your craft. They learn that the creative path isn’t always a straight line, and that one thing leads to another. They learn of opportunities they didn’t know existed. They learn that there’s no magic to what we do – just talent, passion, skills and dedication. The school provides an environment where students are surrounded by the real world of media, and gives them the skills and the confidence to make it their reality. It really isn’t magic – we just make it look that way.