By Tim Peterson The worst feeling I've ever experienced sitting in an edit suite is searching for a shot to use that just isn't there.  The agony of using a shot that just feel right

always bugs me into the wee early hours of the morning.  Back in the day, you could always call up your shooter and rant and scream and curse; wondering why out of the 3 hours of footage they did shoot, that they couldn't just get the one shot you needed!  Lets fast forward to now. Most of the stuff I edit, I shoot myself.  That usually works out great.  I know what I want when I'm shooting, therefore, the edit goes smoothly.  The time I spend agonizing over a missed shot can still happen if enough time is not spent shooting with my edit in mind.

Whether you are shooting a broadcast featurette or a digital video for web, the best way to shoot to edit or to thinking how your footage is going to be edited is all done during Pre-production.  During pre-production, the script is broken down into individual scenes and shots with all the locations, props, cast members, costumes, special effects and visual effects being identified. An extremely detailed schedule is

produced and arrangements are made for the necessary elements to be available to the film-makers at the appropriate times. Locations are identified, sets are constructed, the crew is hired, financial arrangements are put in place and a start date for the beginning the shoot is set.  The detailed schedule is absolutely crucial.  As a videographer, you must have in mind not only the shots you must get, but also the time and sequence that is best to capture them.

In any production it is best to capture shots which identify the scene.  These are usually referred to as establishing shots.  Extreme wide angle or wide angle shots show the location or where the scene is taking place.  Whether it is in an office building, in a house, in a mall, wherever the action is going to be taking place, it is important to get exteriors of the building or at least a few shots of the entire room where the action is going to be.  These shots allow you as an editor to establish or make the viewer aware of where the story is taking place, and mentally prepare them for what is about to happen next. 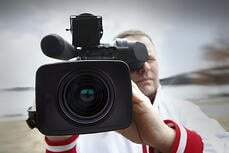 Once you have establishing shots, it is best to capture the action from as many angles as possible.  By having more then one angle of the same sequence you are creating options to choose from during the editing process.  Shoot Wide, Medium, and Close up angles to maximize interest in the sequence.  Also do not be afraid to alter the cameras perspective for a shot.  Raising the camera high, or lowering the cameras viewpoint below eye level, even to the perspective from the ground will dramatically enhance the sequence and increase the interest in it.

Next are cutaway shots or b-roll to cover edit points.  Many times these are mid shots, close ups, and extreme close ups of the area and/or the action that is taking place.  Lets take for instance you are capturing a sequence with somebody sitting at a desk.  Important b-roll to capture would be tight shots of the things the subject is doing at the desk: grabbing the phone, putting the phone up to their ear, putting a file in their desk, typing on their keyboard, an over the shoulder shot of them performing any of these actions.  Remember the more angles you can capture of these shots the more options you will have in your edit.

In a perfect world, you capture a shot and are absolutely confident in it.  I would suggest that once you feel you have captured the perfect shot, do it ONE MORE TIME for safety, if you 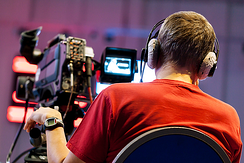 have the opportunity.  Again it is all about giving yourself options in the edit suite.  By only capturing a shot once you are forced to use that angle or shot.  If you shoot it more then once you have the ability to choose if there is a slight difference between the shots.

By having a plan, and sticking with it you will eliminate many of the shooting errors and missed shots that can happen if you go in without any plan at all. Make sure as you hear the dialogue pay attention to what is being said or talked about to clue you in on some extra shots or different b-roll to capture.  The greatest advice I can give is to give yourself options for your edit.  You will not regret it!