The world says goodbye to two of it's most renowned type designers.

Earlier this year, the graphic design world lost two of its most renowned type designers, Hermann Zapf and Adrian Frutiger. 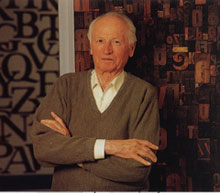 Zapf, who died in Germany this June at the age of 96, began as a calligrapher, and went on to create about 200fonts, including the popular serif face Palatino, the all-symbols collection Zapf Dingbats, and the elegant sans serif Optima, which was used to inscribe the names onto the Vietnam Veterans Memorial in Washington DC. Zapf's colleague, typographer Jerry Kelly, said of the late master, "What Michelangelo was to sculpture and Beethoven was to music, that’s what Hermann Zapf is to type design and calligraphy." 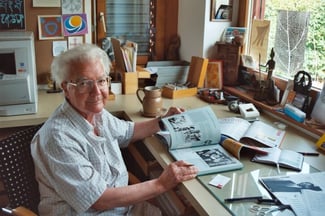 Adrian Frutiger, who was 87 when he died in his native Switzerland in September, created over 40 fonts, including two of the most ubiquitous sans serifs in the world, Univers and Frutiger, which appear on airport, subway and road signage around Europe and the US. He also created OCR-B, a machine-readable font that became the global standard by the early 1970s. Frutiger believed type should be unobtrusive, even invisible. "If you remember the shape of a spoon with which you just ate some soup," he once said in an interview, "then the spoon had a poor shape.”

Here's a video clip featuring Zapf from the film Helvetica (in which he mentions his preference for Frutiger's Univers!).

Is type design something that interests you? Look into our Graphic Design program! You never know what else is out there for you to study and explore. Click here or the button below to request more info and to speak with an Admissions Representative.