Pantone announces Color of the Year for 2015

Pantone, self-described as the world-renowned authority on color, predicts which hue will be the hottest trend in the upcoming year. Marsala was officially announced as the official color of 2015. Characterized as ‘naturally robust and earthy’, Marsala will be used in everything from home furnishings to clothing and cosmetics to graphic design.

Who is Pantone? What do they do?

Pantone is a custom color service company. They provide a set of standards so that wherever something is manufactured in the world, the color would be an exact match. Pantone colors are used in a variety of industries including: printing and packaging, fashion and home, paint, plastics, paper, and fabrics. 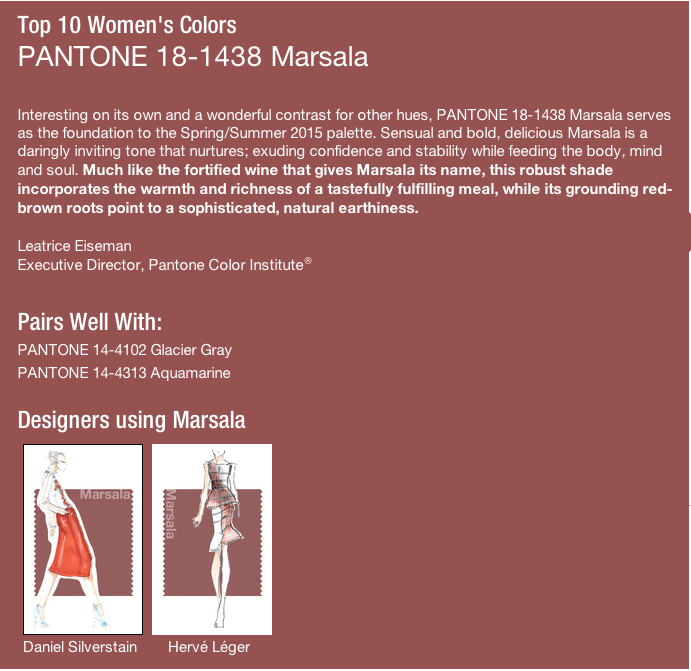 How do they pick a Color of the Year?

“Pantone combs the world looking for color influences. This can include the fashion and entertainment industries – including films that are in production, the world of art, popular travel destinations and other socioeconomic conditions. Influences may also stem from technology, the availability of new textures and effects that impact color, and even upcoming sports events that capture worldwide attention.”

Pantone started as a company that set standards for graphic designers and now it has expanded beyond into a variety of industries. It still has a major influence with designers and their clients. As a designer, you can design packaging or a logo for a client and feel confident that when it is printed it will be done in the correct color.

To learn more about color and how to use it in your designs, check out our Graphic Design Program here at Specs Howard School of Media Arts.

If you see the Color of the Year Marsala being used, let us know! Take a pic and tweet us @SpecsHoward